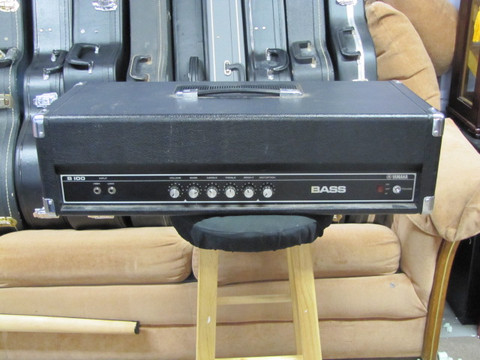 Hover over image to zoom

This amp brings me back to Mr. Krivitzky’s math class.  Ya see old Arnie friggin hated me.  I was a math wiz and could do advanced math in my head.  He failed me despite an A average because I could do this crap in my head and had no work books. So what does this have to do with an amp? I was bored to tears and me and my band mate and best friend Mike would doodle pictures of our stage when we became rock stars.  I had 10 B100’s doodled as I loved this amp.  The store we worked in sold these new and oh did we drool.  Unfortunately we were broke as dirt and played Marlboro Sound Works amps…  Then in college I bought one of these then traded it toward a…  who cares..   Anyway, this is a clean 1 owner amp, lived a peaceful life in a home studio.  Works and functions just fine but has very very minor crackling.  Just needs a minor spray out.  It doesn’t bug me so Im leaving it..  Anyway, this amp is awesome as was Arnie Krivitzky.

All prices are in USD.